Chris Berardo has a new CD out 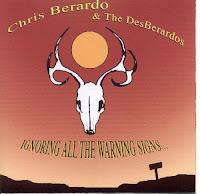 CHARLOTTE, NC – Lamon Records has announced a February 27 national release date for Chris Berardo & The DesBerardos’ new CD, Ignoring All The Warning Signs…, which showcases the band’s Americana/roots rock/pop sound, led by the soulful vocals of singer Chris Berardo. In addition to Berardo on lead vocals and harmonica, the band includes Marc Douglas Berardo on acoustic guitar and vocals, Professor Dick Neal on electric guitar and numerous other stringed instruments, Paul Triff on drums, Art Baguer on bass and Bill Bell on mandolin, piano and organ.

Ignoring All The Warning Signs… was co-produced by two-time Grammy-nominated country/bluegrass artist Dave Moody (who has worked as a musician, engineer or producer with the likes of Doc Watson, The Dixie Chicks, Marty Stuart, Radney Foster, Chet Atkins, Hank Williams Jr. and Steve Earle) and the DesBerardos' own multi-instrumental string wiz Dick Neal, (who also produced both the band’s debut album, American Dust, as well as their last effort, Pure Faith).

Recorded at dLab Studios in Charlotte, North Carolina, and featuring 10 new Chris Berardo-penned originals (along with a version of one of the band’s live staples, the Wilco chestnut “Passenger Side”), Ignoring All The Warning Signs… is a perfect representation of the band’s fiery live performances, renowned among their fans for beautiful acoustic moments alongside the wild rockers and whiskey-laced jams, all held together by the jangly guitars, chiming mandolin and Chris Berardo’s vocals.
Some of the highlights on Ignoring All The Warning Signs… include the catchy opening track, “The One,” the country-stomper “So Good, So Far,” the rocking “Everybody Swings Around Here,” the dark, bluesy lament of “Barstool,” and the gentle,
acoustic, “September Prayer” that closes the CD.
“We like to shake the songs all around,” says Chris Berardo. “It’s not by design, really, just what happens when we play. We like to take as many left turns down as many dark alleys as we want - as long as it all starts from a place of a cool song.”
The band’s 2003 CD on Lamon Records, Pure Faith, generated considerable Americana, College and Triple A airplay, receiving steady rotation play at over 60 American stations (as well as many in Europe), reaching # 1 in several markets, and appearing at # 22 on the Freeform American Roots Chart for January 2004.

Chris Berardo & The DesBerardos will tour the country extensively in support of Ignoring All The Warning Signs…, which is nothing new for this band, which has played shows with such artists as The Marshall Tucker Band, NRBQ, The South Austin Jug Band, Dickey Betts, Little Feat, Jon Dee Graham, The Silos and Reckless Kelly, as well as countless headliner gigs at top-notch listening rooms to beer-soaked bars from Austin to Boston, Key West to Nashville.