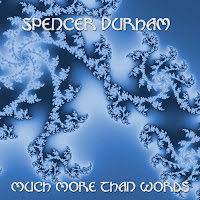 An exciting new talent who is still in high school, Spencer Durham also plays a variety of instruments. His aggressive picking style has been called “rhythm-lead,” which makes one acoustic guitar sound like two or three. He possesses a voice that has been compared to Gregg Allman, Chris Robinson and Ryan Adams, with influences including The Allman Brothers, The Black Crowes, Bob Dylan, John Prine, Van Morrison, The Grateful Dead, Keller Williams, Neil Young, Bob Marley, The Band, and The Beatles.

Much More Than Words was produced by noted session drummer Gerry Hansen, who has toured with several national acts including Shawn Mullins and Randall Bramblett, and also produced Bramblett’s most recent CD, Rich Someday. “Gerry played drums on my first album, I Wonder Why, and I always loved watching him play live,” says Spencer Durham about how the two first hooked-up. “We talked about what I wanted to do on the second album and it was scary how Gerry took off with some of my ideas. Gerry has really helped take my material to the next level. The new album is more raw and edgy than my last, and it gives me a chance to show what I can do with my vocals.”

Hansen brought in the members of Randall Bramblett’s band, including his long-time guitarist, Davis Causey, as well as bassist Michael C. Steele, Mike Hines (guitar, harmony vocals) and Bramblett, himself, to play on the project. Randall plays keyboards and organ on six of the tracks.

“Spencer is a very talented singer/songwriter, “says producer Hansen. “He knows what he wants but is still very open to new ideas. I was given a great deal of trust and creative freedom to do what I do. Spencer knows that you get the players that you want and let them be who they are. He would come in with these great songs and, when we started adding all of the colors to them, his eyes would light up and his energy went through the roof. It was quality entertainment. Watch out... he's got it going on.”

Adds Randall Bramblett: “There’s an old soul inside that young man. Spencer’s got a great future ahead of him!”

“I’m especially proud of my vocals on this album,” adds Durham. Gerry refused to use auto-tune on his pro-tools rig during our sessions. I guess he knew that if he pushed me hard enough we wouldn’t need it. I’m glad we didn’t take the easy way out and cover my mistakes with technical voodoo. It feels pretty good to know that the vocals are all me.

“10 of the 12 cuts on the album are full band productions, but I wanted to do a couple of scaled-back songs that were just me and my guitar. I’ve made a lot of fans doing the acoustic singer-songwriter thing, so those two songs are for them.”

Part of Durham’s maturing process in the last few years has been attributed to opening for acts such as The Zac Brown Band. Brown is also a North Georgia native who has a strong fan base throughout the Southeast and is now being noticed on a national basis. It was touring with Brown that Spencer was introduced to the college circuit, whose audiences really connect with Spencer’s music and style.

Spencer’s promotional efforts for Much More Than Words will target College, Americana and AAA radio. He will also tour college towns throughout the Southeast the spring of 2007. A national tour is being scheduled for the summer of 2007.
Posted by Mark Pucci Media at 3:25 PM