SICK? LAURIE MORVAN GOT THE CURE FOR WHAT AILS YA! 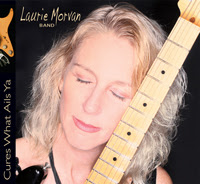 LAURIE MORVAN CURES WHAT AILS YA ON NEW CD COMING JUNE 12 FROM SCREAMING LIZARD RECORDS, DISTRIBUTED BY BURNSIDE
LONG BEACH, CA – "Smokin', sexy, screamin' rock & roll blues like you've never heard a woman - or a man - play." "Few blues guitarists pour as much energy into their performance... she brought the house down with one fiery burst of rock-solid blues fireworks after another."

These are some of the quotes about Southern California-based guitarist/singer Laurie Morvan, whose new CD, Cures What Ails Ya, will be released June 12 on Screaming Lizard Records, distributed nationally by Burnside Distribution.

The Illinois-born and raised Morvan discovered modern blues through artists such as Stevie Ray Vaughan, The Allman Brothers Band, Lynyrd Skynyrd, .38 Special and The Marshall Tucker Band. In her early 20s, she was already playing lead guitar and singing in a power trio, and by going back to the sources of her guitar heroes, she discovered the roots of the blues from artists such as Robert Johnson, Luther Allison, Etta James and Big Mama Thornton.

To support her music "habit," Laurie graduated from the University of Illinois at Urbana/Champaign, received a Master's Degree in Applied Mathematics from California State University in Long Beach and taught math classes to raise funds to record her first album, Out Of the Woods, released in 1997 under the band name Backroad Shack. In 2004, she released Find My Way Home, and by then the group had changed its name to the Laurie Morvan Band.

Cures What Ails Ya was produced by Laurie Morvan and Lisa Grubbs, who also sings background vocals on the new CD. It features 12 original Laurie Morvan songs, all powered by her incendiary guitar work and soulful vocals, which recall Heart's Ann Wilson.

The Laurie Morvan Band will celebrate the release of Cures What Ails Ya with a number of shows in Southern California before heading out to the rest of the country in support of the new CD. For more information, video clips, or to hear sample tracks from the new CD, visit these two sites: http://www.lauriemorvan.com/ or www.MySpace.com/lauriemorvanband.
Posted by Mark Pucci Media at 12:58 PM