JOE RATHBONE IS UNDER THE SCORPIO MOON! 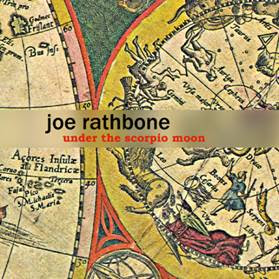 Joe Rathbone has fashioned a new sonic landscape for himself on Under the Scorpio Moon, turning in a poetic study in the art of simplicity. Vintage-raw guitar and keys combine with techno grooves and stellar choruses to paint a picture of a world shifting beneath our feet. The songs deal with elation, depression, dreamlike acceptance of fate and hitting back against the emotional flatliners who try to control even our illusions. Joe Rathbone has drawn comparisons to Elvis Costello, Tom Petty, World Party, Paul Westerberg, Matthew Sweet and many more, but with this CD’s release, he’s found his own, real voice.

Under the Scorpio Moon follows 2004’s I Can Hear the Windows of Your Heart Breaking and his 2002 debut, Welcome to Your New Life, both of which received very favorable reviews in national media, extensive airplay on AAA radio stations and were lauded as an impressive showcase for his songwriting skills.

“He’s fashioned a thoroughly winning pop album filled with strong melodies and well-turned lyrics,” said Paste Magazine. “Joe Rathbone throws himself into the arena of Tom Petty (nee Dylan),” commented the Village Voice. “Joe’s music unites top-shelf hook-a-minute pop songwriting and a pleasing soulful voice,” added No Depression. “The trick to creating a perfect pop confection revolves around getting the mix between sweet and sour just right. Joe Rathbone’s songs prove that he has the recipe down pat. Every song on his second solo release, I Can Hear the Windows of Your Heart Breaking, displays a level of songwriting savvy usually associated with contemporary masters like Elvis Costello or Nick Lowe,” summed up Vintage Guitar.

Rathbone followed up his last release with lengthy tours in the US and UK, as well as opening shows for Shawn Colvin, Chuck Prophet, Peter Mulvey, Robbie Fulks, and Jim Lauderdale, among others, and also appeared on the nationally syndicated radio show, Mountain Stage. Several of his songs were licensed for use on the MTV show, Sorority Life, and a DVD season release of the television series, Party of Five.

Originally from Philadelphia, Rathbone’s music has taken him to New York City, Atlanta and now Nashville, where he currently resides. To support the release on Under the Scorpio Moon, Joe Rathbone will tour extensively in the U.S. and Europe.