BLUES/ROCK GUITARIST-SINGER RICK FOWLER IS BACK ON MY GOOD FOOT FOR NEW CD, OUT MARCH 25 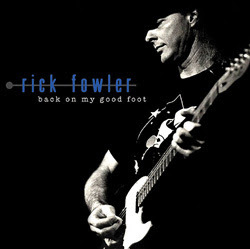 BLUES/ROCK GUITARIST-SINGER RICK FOWLER IS
BACK ON MY GOOD FOOT FOR NEW CD, OUT MARCH 25

SPECIAL ADVANCE CD RELEASE SHOW SET FEBRUARY 23 AT THE MELTING POINT IN ATHENS, GA
LaGrange, GA – Jammates Records announces a March 25 release date for Back on My Good Foot, the label debut CD from Athens, Georgia-based blues/rock singer and guitarist Rick Fowler. Among those joining him on the album are Randall Bramblett (Hammond organ), Gerry Hansen (drums) and Michael C. Steele (bass and backing vocals) – all members of the Randall Bramblett Band – as well as original R.E.M. drummer Bill Berry, who guests on the song, “Road to Nowhere.”

Rick Fowler will perform a special show in advance of the CDs release on Saturday, February 23, at The Melting Point in Athens, backed by a band including many of those musicians from the new album.

Back on My Good Foot showcases Rick Fowler’s main influences of classic raw blues and British blues/rock, which make for an exciting and powerful mix. The new CD features nine original songs either written or co-written by Rick Fowler, as well as a 10-minute rail-shaking version of the Savoy Brown classic, “Hellbound Train.” It was recorded at several studios in Atlanta and Athens, produced by Pat Patten and mastered by the legendary Rodney Mills (Atlanta Rhythm Section, Gregg Allman).

Originally from Bowdon, Georgia, Rick Fowler has been playing guitar and singing in bands since the age of 12. He has performed with some of the world's top musicians and toured much of Europe and The Mediterranean. Although he has played a number of musical styles with various artists, his deep blues roots can always be clearly heard.

Fowler's earlier bands included Ziggurat, Deacon Little, and Fortnox. Fowler also recorded with pop singer Bertie Higgins, whose hit single, “Key Largo,” reached platinum sales in several countries. In 1982, the Fortnox song, “Storm Inside My Head,” went to #44 in US airplay and the band’s video reached the top 20 on MTV. The band toured non-stop for a year in support of the record, headlining medium venues and performing in stadiums as support for such top rock acts as Aerosmith, Cheap Trick, George Thorogood, Joan Jett, The Ramones and The Outlaws. In 1984, Rick’s band Bombay recorded an album with legendary British producer Eddie Offord (John Lennon, Yes, and Emerson, Lake and Palmer), supported by the MTV video, “Rumble Tonight”.

In 1997, Rick put together a band of well-known musicians to perform the first rock concert benefit for Tourette Syndrome awareness. Bill Berry, who was at the time retiring from the mega-star band R.E.M., made the show his farewell performance, allowing his drums to be auctioned off for charity at the end of the night. The event received international coverage including MTV, CNN, VH-1, AOL, Rolling Stone, Spin and a number of other music news outlets. Welcome Companions, a CD recorded by the benefit concert band, was released by Polyglot Records as Rick Fowler and Friends.

Prior to signing with Jammates Records in 2007, Rick played guitar on dozens of CDs, performed hundreds of shows spanning three countries, and produced and performed the music track for the Sundance Film Festival award-winning movie, Dirty Work. Rick Fowler will tour nationally in support of the release of On the Good Foot. For more information on Rick Fowler, visit http://www.rickfowler.com/ or http://www.jammates.com/.