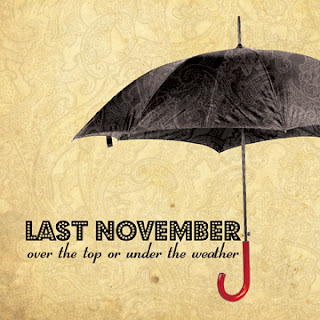 LAST NOVEMBER IS OVER THE TOP OR UNDER THE WEATHER

ATLANTA, GA – Southern Tracks Records announces a March 11 release date for Over the Top or Under the Weather, the new CD from Atlanta band Last November, distributed nationally by Select-O-Hits and AEC.

With the guidance of platinum-selling producer Steven Haigler (Brand New, Fuel, Oleander, Pixies, As Tall as Lions), Over the Top or Under the Weather delivers on the promise of the group’s impressive 2006 debut CD, All the Gory Details, which was featured on “The Real World” and other MTV shows, as well as garnering multi-formatted airplay on over 200 radio stations.

Luke Pilgrim, Last November’s vocalist and principal songwriter who began performing when he was 11, wrote most of the songs for the first album when he was still 15, and produced that disc himself. Now, on Over the Top or Under the Weather, Steven Haigler’s sparkling production concentrates Pilgrim’s highly melodic vocals within edgy guitar inventions like “The Bumper Sticker Song,” the album’s first single and video (which already has received over 100,00 internet views). Rockers like the wry “Jesus Had Breakfast in Bed” and “Butter Me Up”, with its Leslie-fied touches, demonstrate an astounding growth for Last November, while the superb “Sunday Afternoon” reveals the band’s special take on the indie pop rock sound. Besides Luke Pilgrim on lead vocals and guitar, the band includes Tyler Ayers on bass; Chris Jones on guitar, keyboards and vocals; and Taylor Woodruff on drums and vocals.

Over the Top or Under the Weather is Last November's second release on Southern Tracks Records, the independent label founded by legendary music publisher Bill Lowery. It was recorded and mixed at the renowned Southern Tracks Studio in Atlanta, home to such artists as Pearl Jam, Stone Temple Pilots, Train, The Bravery, and Bruce Springsteen & the E Street Band (who recorded their 2007 milestone CD, Magic, at the studio) and mastered by Rodney Mills.

Booking is in progress for a spring tour in support of Over the Top or Under the Weather
(booking@lastnovember.com), and Southern Tracks will also back the release with a national radio promotion campaign.

Last November continues to expand its soaring international fan base, playing major venue shows, colleges and clubs, while the band’s web presence has been growing by leaps and bounds, as evidenced by the popularity of its MySpace web site: www.myspace.com/lastnovember. Songs from the new CD can also be previewed at that site.